“After learning about the work of Camp HOPE [America] at the Ventura County Family Justice Center, members of the Westlake Women’s Club Art and Culture Committee collaborated with camp members to create a mural at the center.

“Camp HOPE [America] is a program for children who have been affected by crime. The county adopted the program six years ago to support crime prevention and help local kids.

“’She took their thoughts and ideas and designed three ideas for a mural,’ Lewis said.

“After voting on the designs, they selected one with a sunburst that had spaces where the children could add their own touches to the artwork, she said.

“Sullivan said art is a form of therapy and a way to express feelings, and it also creates a sense of accomplishment.

“Behr Paint Company donated the paint. The DIY Home Center in Westlake contributed the other supplies. 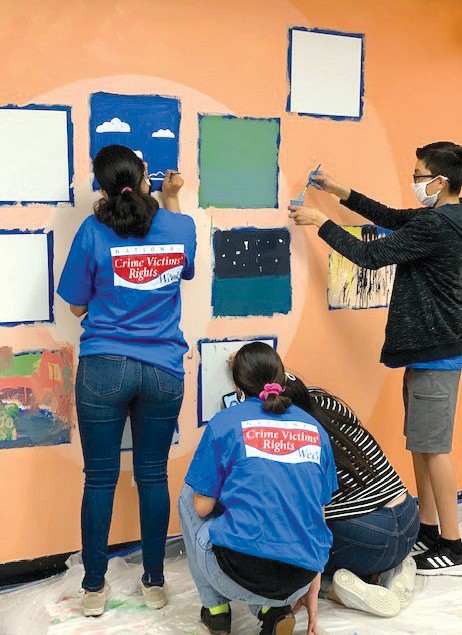 “About 7,500 domestic violence calls are received each year by 911 operators. About 45 children are currently being helped at the Family Justice Center.

“The Westlake Women’s Club is a philanthropic organization that works to improve the lives of people in the Conejo Valley and surrounding areas.”